Lost in the Night – Moose’s Story

Posted on December 30, 2012 by lostdogsofwisconsin 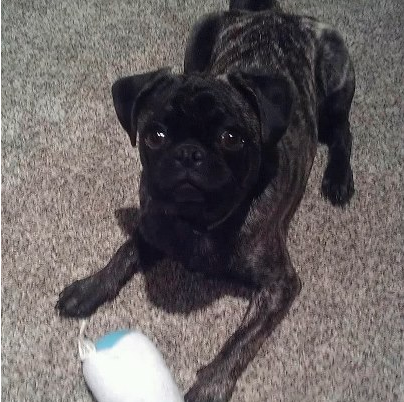 Moose, a six-month-old pug puppy, disappeared from his owner’s yard in Stevens Point two nights before Thanksgiving. He’d only been at his new home for 10 days, so his owner was caught off guard when he ran from her yard during a potty break. Moose’s owner began calling his name, but he didn’t return. She ran across the street to the field where he had bolted, but he was a mostly black dog, and it was dark outside, which made it extremely hard to find him.

Moose’s owner was frantic. She had a trip planned to Illinois to visit her parents for Thanksgiving. How could she leave when Moose was lost? He would never survive the cold. She continued her search but came up with nothing. She finally decided to leave the garage door open and set his kennel out with food while she made her way home for the holidays without him. The guilt was excruciating.

Upon her return, Moose’s owner contacted Lost Dogs of Wisconsin for tips and suggestions on how to bring Moose home safely. They provided her with information on shy dogs, which Moose certainly was. Moose’s owner was surprised to learn that one of the worst things you can do with a shy dog is run after them or call their name too loudly. This can scare a shy dog and cause it to bolt. Moose’s owner was worried. She’d done those things. Had she caused him to run farther away?

Another week and a half went by with no sign of Moose. Reality began setting in for Moose’s owner; she probably wasn’t going to see him ever again. This sad realization hurt Moose’s owner more than anyone knew because she had just lost her 5-year-old French Bulldog rescue to heart failure. There was no way she was going to take the chance of getting a third dog when luck clearly was not on her side.

Trying to move on, Moose’s owner set out to get a Christmas tree. On her way home from the tree farm, she noticed an animal in a driveway a half-mile from her house. She looked closer and realized it was Moose! On instinct, she stopped the car, jumped out, and started calling his name. He started to move away. Suddenly, Moose’s owner remembered the tips she’d received about shy dogs. She calmed herself down, got low, and started talking to him in a baby voice. It took Moose a moment to recognize her voice, but once he did, he came to her. Moose’s owner hugged him tightly; stunned she’d found him so close to home after he’d been missing for so long.

A trip to the vet revealed that Moose lost eight pounds, which required an overnight stay with fluids. He also had a puncture wound on his neck that was treated immediately with antibiotics and a topical spray. Overall though, his health was fine, and his owner was happy to have him back. Welcome home, Moose!

What can we learn from Moose’s story? Sightings of Moose had occurred, which means signs and flyers might have helped bring him home sooner. The microchip that the breeder had installed also gave Moose’s owner comfort. If he had been found and scanned, he may have been returned sooner. Owners of dark-colored dogs may also want to consider a glow-in-the-dark or blinking collar for better nighttime visibility. 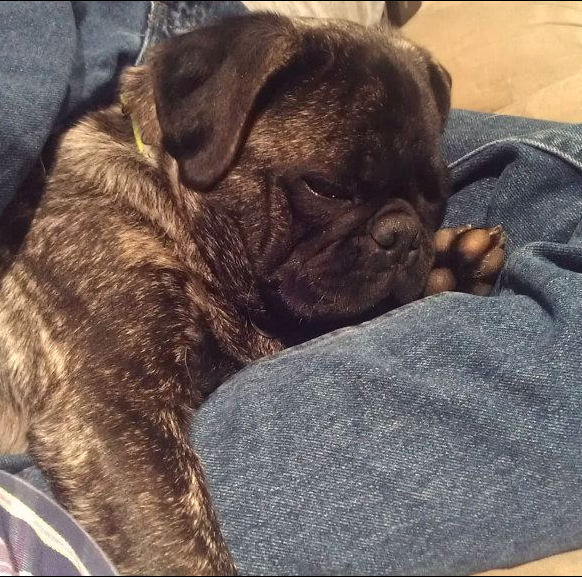 This entry was posted in Reunion Stories. Bookmark the permalink.
Loading Comments...