Have You Seen Bailey?

Posted on September 24, 2013 by lostdogsofwisconsin 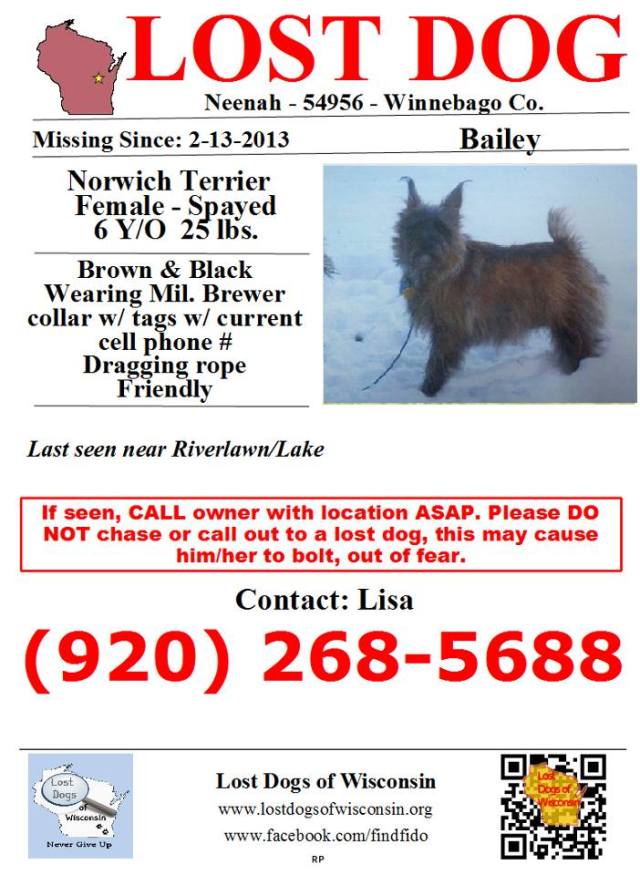 Bailey from Neenah, Winnebago County is still missing.  It is strongly suspected that Bailey was picked up after she went missing and kept by the finder.  This is a message that Bailey’s owner has asked us to share in the hopes that the finder will see it:

“September 13. Friday the 13th. Seven months that my little Bailey has been missing from her home in Neenah, Wisconsin. I’m not giving up looking for her. Someone has her, and just as bad, there are people who know it and are condoning it.

But until Bailey is back home where she belongs, I worry about her and want her to be happy. So I have something to say to the “person” (there are so many other words I could use here) who has her. On one hand, I hope you have children. Bailey loves kids. On the other hand, I hope you don’t have children because you’re setting a terrible example for them.

Bailey rings bells hanging from the doorknob when she wants to go outside. She LOVES the crust on the ends of the bread loaf. She also loves fruits and veggies, especially baby carrots, banana, apple, and melon. (Please don’t give her grapes or raisins. They’re bad for dogs.) She eats ¼ cup of Blue Buffalo Wilderness Small Breed dog food in the morning and in the afternoon. She’ll let you know when she’s hungry by pawing at you if you don’t feed her soon enough in the afternoon. She loves to eat.

She likes to lie on my lap, or lay tight against me, or on top of me, but when she’s ready to sleep, she wants to move off by herself where she won’t be disturbed. Bailey doesn’t like her butt touched. I’m not sure, but I think it could be from them cutting her tail short.

Bailey is a sensitive soul. It scares her if you yell at her. She responds great to positive reinforcement. She’s a very loving dog who wants to do the right thing.

She’s a great varmint hunter. When she’s outside she loves looking for moles. She’s killed a few of them, too. She’s a terrier, so she digs. You can’t get angry at her for it – it’s what terriers do. She loves the cat. She plays with him and licks his ears. He just recently turned 15 and he really misses her.

If you give her a small treat when you sit down to eat and another one when you’re finished, she’ll leave you alone while you eat. She loves peanut butter and I put some in her Kong when I leave.

She LOVES car rides. She likes to sit in the front seat with the widow down and her head out the window. She hates squirrels. And rabbits. And if she had a choice, she would prefer there were no birds in the yard either. At least no Mourning Doves.

She likes wading in water. She also likes snow. She’ll dig her nose in the snow and come up with a face full of it. She has a weather repellant coat. With that wiry hair of hers, she shouldn’t have a lot of baths or it will ruin her coat.

Please, take good care of my little Bailey. I’m not going to stop looking for her.” Lisa