Posted on July 9, 2017 by lostdogsofwisconsin

(as told by Bennie’s owners)

We live in the Shawnee Nat’l Forest in southern Illinois, about 15 miles from a college town where animals are sometimes abandoned at the end of semester. Bennie appeared at the end of spring semester, extremely skittish, although eager to eat the many small meals/day we put out. We could not get within 50 yards of him, but of course we were calling & whistling!! Google provided info that one should kneel down, smack lips, pretend to eat food, no eye contact. He came to me IMMEDIATELY  and I put him in our pen using a trail of braunschweiger. He had no collar, wasn’t microchipped and the first vet visit revealed ear mites, several intestinal worms & heartworm. We were all in. It was on his first vacation a couple weeks later (pre-heartworm treatment, on antibiotics) that he showed us he was the perfect family dog in many ways!

But then we went to visit friends in Mercer, Iron County, Wisconsin  for an overnight stay (before taking our grandkids to the Milwaukee airport two days later) and Bennie got a scent while we were all still talking in the driveway. He was gone without a trace. We did all the wrong things, driving around in cars for hours, calling and calling.

After a call from Lost Dogs of Wisconsin caseworker, David Woods we learned to stop calling, put out some used clothes on the porch, hang his blanket on the mailbox and leave out food.

We made a flyer from your website the next day and posted everywhere, driving around in the area. Many folks had already heard about Bennie! The network is phenomenal! Your personal phone call that morning was so kind & supportive. Just so hard to believe he could make it back to us in an unfamiliar region, with a mother bear in the neighborhood, coyotes and wolves.

With heavy hearts after two nights, we packed up to drive to Milwaukee, getting a phone call four hours later that Bennie had run through the yard! We got the kids on their flight and drove back to Mercer, where Bennie was waiting under the porch. He was eating food but would not approach our friends, who were wearing our stinky teeshirts! He heard us pull in the drive and was all over us immediately! We believe he was truly lost and found his way back to a strange house because of your suggestions.

Thank you all, so very very much! You are doing incredible work!

All of our best, Mary & Harry 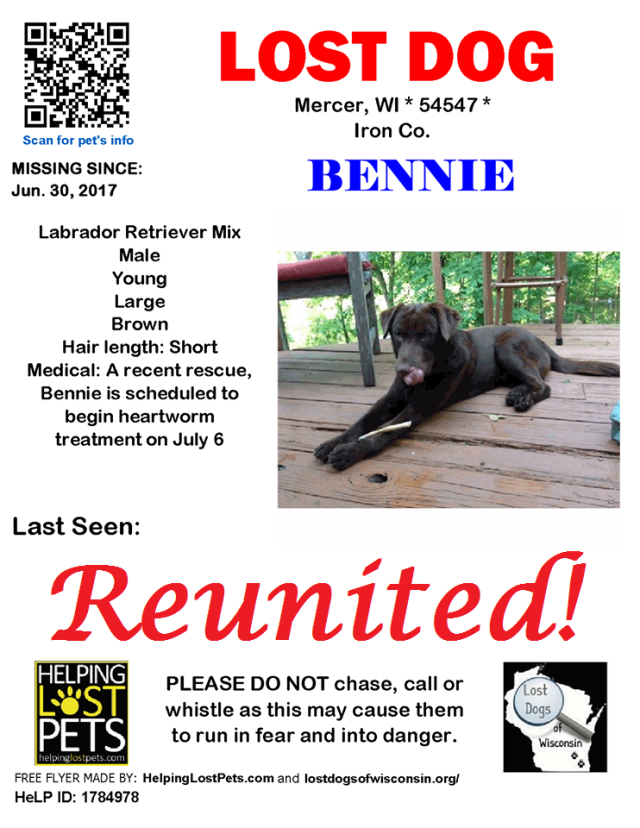